Sociologists studying the Quarg and other alien civilizations have noted that the early development of most sentient species follows the same basic pattern, where periods of unsustainable growth alternate with periods of conflict or collapse. This expansionary phase typically ends in a crisis which, if successfully navigated, leads to a period of stability - but also to stagnation. When low-tier sentient species are in these stages of development, their models of government, systems of values, and economic stratification are remarkably similar despite differences in genetics, culture, and cognition.

Advanced species, on the other hand, are often wildly different from each other and behave in ways that seem inscrutable or even irrational to outside observers. The currently accepted explanation for this is that all sentient species initially face the same threats to their survival: lack of food, extreme environmental conditions, attacks by other tribes or by other creatures, etc. In order to survive this stage each species will generally settle into one of a limited number of near-optimal strategies for facing those threats and satisfying what xeno-sociologists refer to as the “common hierarchy” of needs: 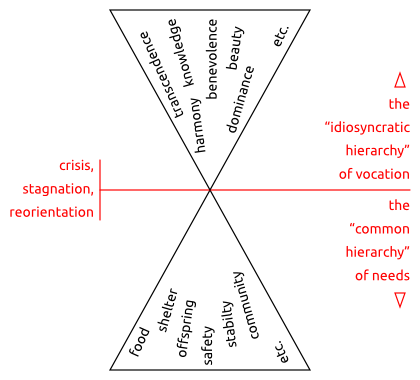 As a species becomes more technologically advanced, individuals and communities face fewer and fewer threats to their survival. Unless prevented by extreme inequality or constant interior or exterior conflict, the species reaches a point where few or none of its members ever experience deprivation of any element of the common hierarchy of needs. Surprisingly, this often leads to a period of stagnation and lack of purpose, or less frequently to sectarian conflict driven not by the need for survival but by competing ideologies.

Species that grow beyond this stage do so by developing a so-called “idiosyncratic hierarchy” of new motivations and goals that are not directly tied to survival, because survival at this point is taken as a given. This is the reason, for example, that one species might dedicate itself to preventing conflict between less advanced species, while another might decide to focus on learning ways to shape and transform planetary ecosystems, or on finding a way to transcend physical existence, or on creating incredible artwork and music, or on exterminating all other sentient species.

As a consequence of this, when encountering an advanced species it is important to consider that even the most basic assumptions - for example, that individuals will have an urge for material gain or for self-preservation - may not hold true.